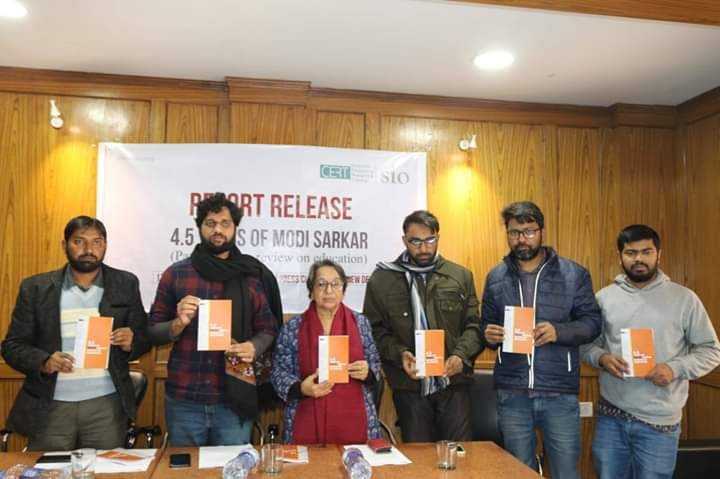 New Delhi: Participation in the democratic system is very important. In a democracy the representative of the people i.e., Member of Parliament (MP) has to represent and resolve the problems of society within and outside the Parliament. It is a major part of the democratic system that people’s representatives discuss issues in the Parliament and provide the right solution. When elected representatives do not perform this task properly, citizens and organisations need to carry out this task by bringing the matter to the MP’s. We have been doing this job for the last couple of years.
It is surprising to see that the Indian parliament even after 70 years of Indian independence is still debating the basic infrastructure related issues in the Parliament. It has now been eight years since the implementation of the Right of Children to Free and Compulsory Education Act 2009, which mandates a set of minimum norms and standards for schools. The questions raised by the members and answers provided by the concerned Minister only indicate knee-jerk response to the problem. According to available statistics, the compliance of RTE Act norms and standards is around 8-10 per cent in the country. It shows the magnitude of the problem.
It is the time now for Union Government to prepare a detailed plan and roadmap to implement the RTE legislation in letter and spirit with adequate financial support. The Central government should demonstrate the necessary political will for holistic implementation of the Right of Children to Free and Compulsory Education Act 2009.
ENROLLMENT RELATED ISSUES
• Poor admission rate under 25 per cent of RTE
• Targets for reducing dropout rates amongst girls students
• Children not attending schools
• Children without schooling
• Literacy among Divyang children
• Girl children who are out of school from SC, ST and OBC communities
• Literacy for poverty alleviation
• Promotion of day care schools
In relation to quality of education, there are discussions in parliament. Maximum questions related to the quality of education were raised by Indian National Congress, after which was All India Anna Dravida Munnetra Kazhagam, followed by Janata Dal Party .The least active party was Bharatiya Janata Party; the party had asked only one question related to the quality of education.
All the questions were answered by Shri Upendra Khushwa in which he specifically mentioned that there are regular surveys which are conducted by NCERT and a system to monitor the performance of students. Despite these surveys followed by interventions, there is an urgent need for improving to quality of education in reversing the decline in enrolment in state-run public schools.
It is important to appreciate the measures taken by the local authority to improve the overall quality of education in the state. However, the measure taken up by local authority are grossly in adequate and doesn’t meet the requirements listed under section 8 and 9 of the RTE Act to achieve good quality of education mandated under section 29(2) of the RTE Act. Although the local authority did implement many centre and state sponsored schemes to promote education such as SSA, Kasturba Gandhi BalikaVidyalayas, Mid-day meals, Rashtriya Madhyamik Shiksha Abhiyan (RMSA), incentive and merit scholarship, subsidies, education loans, Vidyanjali, Padhe Bharat-Badhe Bharat, Beti Bachao-Beti Padhao etc., the quality of education in government schools especially the schools run by the state government is not up to the expectation level .
However, the measures taken up by local authorities are lacking behind as there is no proposal to introduce neighbourhood school system based on common school system as indicated under section 3 of the RTE Act, no adequate funds to provide the infrastructure specified under the norms and standards of RTE Act. Therefore, it is important that centre, state and local authority should prepare a joint road map in accordance with the roles and responsibilities assigned to them under sections 7, 8 and 9 of the RTE Act to achieve the best results.
Section 24 of the RTE Act provides for specific duties of teachers. This includes prime responsibilities such as attending school regularly and completing the prescribed syllabus in a time. They also need to provide supplementary support to children who need such support. They are also responsible for assessing children’s learning based on continuous and comprehensive evaluation and need to interact with parents to share the performance.
In order to discharge the above said roles and responsibilities, section 25 of the Act seeks to provide for maintenance of pupil teacher ratio, by the appropriate government and local authority. An apparent contradiction between this provision, which requires that the pupil teacher ratio shall be maintained within a period of six months, vis-à-vis the provision under section 19 mandating that the norms and standards prescribed in the Schedule should be met within three years.
However, even after 8 years of implementing the legislation, the appropriate government failed to fulfill the core provisions of the Act. Lack of trained teachers, huge number of teacher vacancies and appointment of unqualified contract teachers negates the basic provisions of the Act. The teachers are continued to perform non-teaching work,even though Act prohibits deployment of teachers for non-educational purposes, other than decennial population census, disaster relief duties or duties relating to elections to local authority, state legislatures and parliament.
This provision will ensure that more time is available to teachers for school/ classroom transaction, and that teachers are not deployed for work that takes them away from their classroom responsibilities.
These issues need to be addressed on priority basis. Government should take all measure to put in place qualified trained teachers in place according to the norms and standards specified under the Act to meet the quality requirements set out in section 29(2) of the RTE Act . 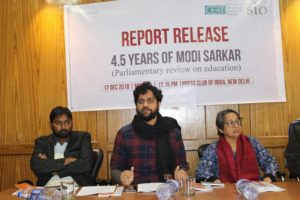 Higher Education and Niti Ayog: Niti Ayog has proposed a three tier university system. This is close to the four ‘Varna’s’ in ‘Manu Dharma Sasthra’. The state universities got neglected after establishment of Central Universities. Now, under the proposed world class universities scheme, the central universities, the IITs, IIMs and the like would also be neglected. Rather, things could be understood more properly if we see them from the other side. When they wanted to neglect state universities, they established few central universities and when they want to neglect the central universities, they are bringing the so called world class universities. In the proposed world class universities, money will be the only merit and admission would be denied to all poor and disadvantaged to ensure that Rohit Vemulas could not be admitted and Kanhaiyas would not be elected. These will be the dream universities of Manuvadies.
If we try to summarize the policy perspective as enunciated in the Niti Ayog Action Plan, we may find four major issues. They may be like, a) instead of strengthening government schools and colleges, the private sector will be encouraged and funded through fee reimbursement system, b)as far as government institutions are concerned, the input approach will be replaced by outcome approach. Instead of providing necessary infrastructure, appointing qualified teachers and inspiring professionalism in them, the policy of more governance, more supervision and electronic surveillance will be pursued, c) the wrong method of measuring the results of educational achievements only in marks and ranks which is being practiced in private institutions will from here after be followed in government schools too, d) institutionalization of multi-standard system in government sector at all levels. These are the only few key measures among many proposed in the Niti Ayog doc and are selected to compare with the report of the UNESCO to see the possible outcomes.
In last few years because of democratizing forces and with increasing aspirations of citizens Indian universities particularly public universities have undergone phenomenal change. On the one hand the composition particularly student compositions of university have undergone change. At the same time the role and contribution of university as a centre of teaching and research in the national life is also being evaluated in the changing global context of economic liberalization under the pretext of neo-liberal ideology. One of the outcome of such development is that the existing system of higher education is seen as outdated or having not much relevance because of its old fashioned curriculum or producing not skilled people who can help in ‘wealth creation’ and place the country on the list of global ranking by developing the ‘culture of patenting’. As a result existing regulatory system or any kind of restraint in functioning of university is being seen with suspicion. Indeed the need for creating a new eco-system to develop higher education is being felt. In this new eco-system greater interaction between universities and business and corporate people is appreciated. In this regard India university system or Indian higher education culture is witnessing some of structural shift in managing its affairs. Introduction of Autonomous Regulation-2018, Graded Autonomy, introduction of a new category of institution that is ‘Institution of Eminence’ are some of the major reform measures are being talked about. Further with the shrinking public resources creating Higher Education Funding Agency (HEFA) along with reducing the multiple regulatory measures by introducing Higher Education Commission of India-2018 are some of the major changes. The core of these reform measures is to make a university competitive which is foundational character of neo-liberal ideology. Moreover these reform measures are more in direction of corporatization of higher education. Therefore, interesting feature of such reforms is that now more business people in alliance with bureaucracy and politicians has begun to take interest in defining the aim, content and purpose of higher education in general and university education in particular.
In continuation of such reform measures implementation of Central Civil Services rule is a step in that direction. The CCS rules state that ‘no employee shall be a member of, or be otherwise associated with any political party or any organisation which takes part in politics. Nor shall he take part in, subscribe in aid of, or assist in any manner, any political movement or activity’.
With regard to implementing CCS in universities it is being said that university professors are mere employee of ‘state’. They get the salary from state exchequer; therefore, they have to abide by the state.
Reducing the role and contribution of teaching community just as ‘employee’ has become a new trend of corporatist model of education by the corporatist led state in economic globalization.
Prof. Madhuprasad (Advisory board Member, CERT)
Mr. Sadat Hussain (Zakir Hussain Centre for Educational Studies, JNU)
Mr. Thouseef Madikeri (Director, CERT)
Mr. Syed Azharuddin
National Secretary, SIO of India
[email protected]