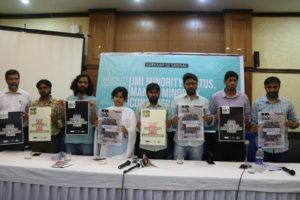 The submissions made by the Government of India before the Delhi High Court on the minority   Character of JMI doesn’t only neglect the fundamental rights of minorities guaranteed under the constitution but also reflects the shaky commitment of the current dispensation towards the diversity of the Nation. The change of central government’s stance on the Minority character of JMI amounts to the denial of historical facts. We firmly believe and assert that the character of AMU and JMI cannot be determined unless the specific historical context of their establishment is taken into consideration. The controversy regarding JMI’s minority character is ill founded and is wrongly taken. NCMEI has adjudicated and held that “Jamia was founded by the Muslims for the benefit of Muslims and it never lost its identity as a Muslim minority educational institution”, and was, therefore, “covered under Article 30(1)… read with Section 2(g) of the National Commission for Minority Educational Institutions Act”. Therefore we on behalf of the Muslim community demand entitlement of the community to “establish” and “administer” educational institutions of its choice under Article 30 of our constitution. In northern India the average enrolment of  Muslims in Non minority universities is around 1-3 %, average enrolment of Muslims in Jamia Millia Islamia is 50% and 75% in Aligarh Muslim University (Source: Indian Muslims and Higher Education: A Study of Select Universities in North and South India). In such a scenario, it is deliberate and intentional on the part of Central Government to oppose the Minority status because of the discriminatory perception of the government functionaries of viewing the Minority Status not as a bridge for educational development of marginalized community but as a University associated with Muslims against which the government is prejudiced and biased. We have faith in the judiciary and hope that the court will adjudicate the matter in the light of specific historical context of the establishment of these institutions and taking into consideration the right of minorities guaranteed under chapter 3 of our constitution. We condemn the government’s shameful betrayal of JMI’s Minority Status and resolve along with the entire Jamia Fraternity to continue the struggle for our constitutional rights. 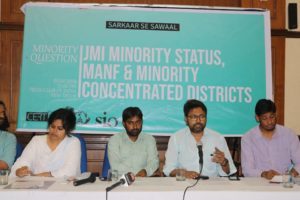 Muslim Enrollment ratio was far less than any other communities in higher education sector in India are exposed by the official records of government itself. As per the data of All India survey on Higher Education, Muslim student ratio was only 4.9% in 2016-17. In proportion to their population of 14%, it is explicitly proving Muslim community is having much lack in getting their representation. Community representation among teachers is also nothing short of bad representation. There are only 4.9% teachers from the community in the higher education.
In such worse situation, it is the obligation of the fair and just government to ensure the missed representation to fulfill this backlog. Instead the Central government has taken exclusionary steps to curtail the existing measures to ensure their representation in the higher education and subsequently in education sector by scuttling MANF fellowship for Muslim community with more and more conditions. As per the new notification Muslim research scholars need clearance of UGC NET exam to apply for MANF fellowship. This is nothing else but yet another step by central government which is against Muslim community and also undemocratic.
We, strongly demand to revoke the new notification and to continue the curtailment move of government to exclude backward community students from higher education sector. We also demand the government to take steps to ensure fair representation of student who belongs to marginal communities considering the facts of AISHE 2017 set up by Ministry of Human Resource Department. 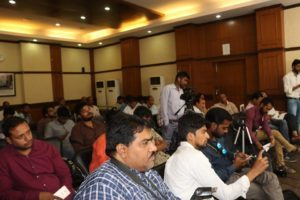 Based on 2001 census data, a directory of 90 Minority Concentration Districts (MCDs) in India has been prepared by the previous Government.  In the latest list of 20 most backward districts in the country released by Niti Aayog in the Month of March, 2018 eleven are Minority-concentration districts. 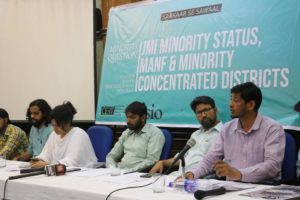 In pre-school, out of school, drop out at higher education, according to NSSO, NUEPA, UNICEF and various reports, ‘Muslims are at ladder at each level of education, educationally backward’, it should be included and addressed without which India should not be Knowledge society. Non existence of Pre schools, Kendriya Vidyalayas, Navodaya Vidyalayas in Minority concentrated areas; non availability of trained staff in respective medium is a big challenge. Major gaps in quality of Govt. – Private; Urban- rural, English- Hindi/Regional language / Urdu schools is a challenge in education system. Under Teacher Development, Training modules, material in regional languages, Urdu is not available or it is not up to the mark. Three centres of MHRD for Professional Development of Urdu Medium Teachers do not fulfill the requirement at national level. With a framework for providing quality education to the weaker sections in society, as part of PoA, NEP 1992, Human Resource Development Ministry has approved setting up of Block Institutes of Teachers Education (BITE) in 196 districts in 2013, less than 25 BITEs are established and functional as planned in minority areas. The NEP draft acknowledges greater and focused attention for SC, ST and Muslim students to curb high rate of Out Of School Children, but it miserably fails in suggesting any policy initiative in this regard. GER in Higher Education for general, SC, ST categories, but for Muslims which is again very low as compared to national average, greater and focused initiatives for GER improvement of Muslims in higher education is urgently needed. The findings of National Achievement Survey (NAS) for general, SC, ST, OBCs is mentioned in the NEP draft as challenge, neglecting for Muslims which is again worst. It requires special measures for their betterment.

It is a fact that all Minorities in India are not educationally backward, only Muslims are (see India human development report of Niti Aayog, current MHRD annual report on education, and NSSO report). The 1986 policy was sensitive about minorities. NPE 1986, considered their education which proves its sensitivity towards a human rights perspective. The Govt. reports have accepted Muslims as ‘educationally most backward’. Muslims SC and ST constitute more than one third population of India; Govt. is silent on the educational issues of these communities. How can we dream of India to become a Super Power if one third population is devoid of Quality education? But most unfortunately, NEP 2016 didn’t mention any such initiatives for educationally backward classes of this country. Can a country become superpower, when its more than one third population is illiterate or mal-literate?

We demand Government to establish Kendriya Vidyalaya Model schools in all the minority concentration areas with 50% reservation to minorities and also establish University with Minority status in all the Districts. Provide Scholarships and Tuition Fee Free facilities to all the enrolled students. 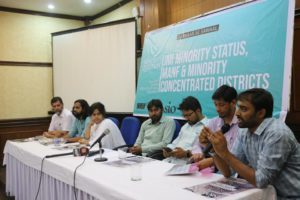 Number of Scholarships must be increased from present target to all the eligible minority students studying professional courses at par with SCs/STs/OBCs i.e., up to saturation level.  Presently it caters the need of less than 15% of deserving minority students.

100% reimbursement of Tuition Fee for just 85 Premier Institutes is injustice with minorities. It must be similar as implemented for SCs, STs who avail 100% Fee reimbursement in all Government, Non-government aided as well as un-aided professional courses of tuition fee 6-7 lakhs per annum.

Total Tution fee charged by Govt. as well as Private un-aided institutions in higher technical and professional education must be reimbursed for minorities. 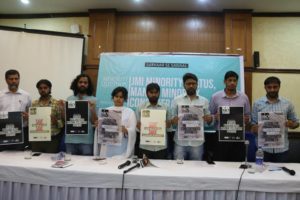 Number of Scholarships must be increased from present target. All the eligible minority candidates must be awarded by the Scholarships to increase their Gross Enrolment Ratio in Higher Education from present 7.7 % to targeted 15 %.

100% fee reimbursement in all junior colleges, undergraduate and post-graduate courses (aided as well as un-aided), research fields must be awarded at par with SCs, STs & OBCs.

Number of Scholarships must be increased & all the eligible minority candidates must be awarded by the Scholarships to decrease the drop-out rate.  Presently just 15-20% of the Eligible students are getting scholarships.

It is strongly urged that, this Fellowship Scheme must be implemented with increased budget at par catering at least 3000 minority students each year for M.Phil. & Ph.D.

National Overseas Scholarship (Karnataka Model) should be implemented so that minority students can also go abroad for better, advanced educational and professional courses and research.