Muslims being the largest minority of the largest democracy several provisions concerning education of minorities were incorporated in the National Policy of education- 1986 and in its Programme of Action (1990), it was proposed to design varied kind of programs and schemes to modify the madrasah curriculum, minority education and its development. But, the whole efforts might not achieve any significant targets for different reasons: lack of incentives, gap between theory and practice, government’s indifferent attitude. But, the fact could not change and Muslims remained backward in educational development. Not only this, the prime minister’s 15 Point Programme was issued with guideline 11 and 12 pertaining to education which could not change the fact but some statistics. The Sachar committee Report (2006) made it quite clear that Muslims are far behind other communities.

The case can be contended by referring to the Sachar committee reports on many issues related to the Indian Muslims. The overall literary rate in India has been around 74% for quite some time, the literary rate of Muslims is around 60%. The data later falls down with the increase in the level even at the high school level due to drop out scenario. Muslims fall far behind others, where, in general, 26% of those aged 17 years and above have completed matriculation. This percentage is only 17% amongst Muslims. 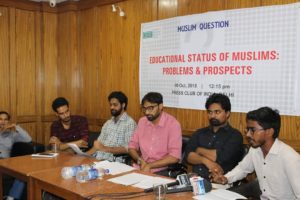 Muslim Enrollment ratio was far less than any other communities in higher education sector in India are exposed by the official records of government itself. As per the data of All India survey on Higher Education, Muslim student ratio was only 4.9 – 5.0 % in 2017-18 in proportion to their population of 14%, it is explicitly proving Muslim community is having much lack in getting their representation. Community representation among teachers is also nothing short of bad representation. There are only 4.9% teachers from the community in the higher education.

In northern India the average enrolment of Muslims in Non-minority universities is around 1-3 %, average enrolment of Muslims in Jamia Millia Islamia is 50% and 75% in Aligarh Muslim University (Source: Indian Muslims and Higher Education: A Study of Select Universities in North and South India). In such a scenario, it is deliberate and intentional on the part of Central Government to oppose the Minority status because of the discriminatory perception of the government functionaries of viewing the Minority Status not as a bridge for educational development of marginalized community but as a University associated with Muslims against which the government is prejudiced and biased.

Centre for Educational Research & Training (CERT) studied 34 universities of India in which 63,325 Muslim students pursuing their education out of total 9,15,806 students, it is noticed that the data of All India survey on Higher Education, Muslim student ratio was only 4.9% in 2016-17, vast section of Muslim populace remains illiterate due to lack of facilities for primary and secondary education.

The Educational backwardness of the Muslim community in India has been established and highlighted by a number of officials report such as the Gopal Singh Minority Panel Report, the reports of the 43rd Round and the 55th Round of the National Sample Survey, and the programme of action under the New Education Policy (1986) and NEP revised (1992) and Sachar (2006). The various schemes launched by government to ameliorate the economic and educational condition of Muslims have remained mostly on papers, the benefits of various government schemes, aimed at improving the socio-economic condition of the weaker sections of society, have not accrued to Muslims in any significant measure. Many schemes did not succeed, but that should not deter us from continuing the endeavor.

We demand the government to take steps to ensure fair representation of student who belongs to marginal communities considering the facts of AISHE 2017 – 2018 set up by Ministry of Human Resource Department.

Based on 2001 census data, a directory of 90 Minority Concentration Districts (MCDs) in India has been prepared by the previous Government. In the latest list of 20 most backward districts in the country released by Niti Aayog in the Month of March, 2018 eleven are Minority-concentration districts.

Mewat region lingered underdeveloped still after India’s independence and the creation of Haryana state in 1966. The agricultural opulence of Mewat region during 1980 was rich. Paradoxically, the proximity to the national capital made Gurgaon District a new millennium hub as an industrial centre in the1990’s. The areas which were demarcated for Mewat district from Gurgaon (Gurugram) in 2005 remained agriculturally and industrially backward. It lacked vital infrastructure such as education, health, basic amenities viz. railway links for the development of transport and commerce. According to 2011 Census, Mewat district had total population of 1,089263. 88.61 % percent of its population is rural and just about 11.39 % per cent is urban. Muslims, account for 79.20 % per cent of the total. The total literacy rate is 54.08%, gender wise, male and female literacy were 69.94 and 36.60 respectively. The Muslims living in Mewat district are called Meo. They are listed under the OBC category which means they are recognized as part of the backward class communities. 493 primary schools exist in the District but only 45 High Schools are there, approximately 80% Muslim concentration district has 352 sanctioned positions for Sanskrit, 116 for Hindi and 03 for Urdu. A report claims that out of 162,000 students registered in primary schools, 48,000 reached class 8 and only 12,000 passed class 10 in the year 2015. The district is also lacking in educational infrastructure. It has 3 colleges and only one polytechnic and 7 ITI/VEI which reveals the precarious situation of educational facilities. Primary schools exist in 78.14 per cent of the villages, but there is a short fall of Middle, High School and Senior Secondary Schools which is 9.30, 6.91 & 3.77 per cent respectively. Therefore girls’ formal education suffers from neglect. The girls belonging to Muslim communities prefer to go to Madarasas and not to high schools which are not located in the villages. Mewat has 77 Madarasas, 18 of them are common for boys and girls.

CERT opines that a 72 year old Independent India has miserably failed to provide the easy access and quality education to all. Owing to this, there are still some districts where people are deprived of education and thus economically disadvantaged, socially crippled and politically under-represented. This lack of education is responsible for many problems they are facing in day-to-day life.

In pre-school, out of school, drop out at higher education, according to NSSO, NUEPA, UNICEF and various reports, ‘Muslims are at ladder at each level of education, educationally backward’, it should be included and addressed without which India should not be Knowledge society. Nonexistence of Pre-schools, Kendriya Vidyalayas, Navodaya Vidyalayas in Minority concentrated areas; non availability of trained staff in respective medium is a big challenge. Major gaps in quality of Govt. – Private; Urban- rural, English- Hindi/Regional language / Urdu schools is a challenge in education system. Under Teacher Development, Training modules, material in regional languages, Urdu is not available or it is not up to the mark. Three centres of MHRD for Professional Development of Urdu Medium Teachers do not fulfill the requirement at national level. With a framework for providing quality education to the weaker sections in society, as part of PoA, NEP 1992, Human Resource Development Ministry has approved setting up of Block Institutes of Teachers Education (BITE) in 196 districts in 2013, less than 25 BITEs are established and functional as planned in minority areas. The NEP draft acknowledges greater and focused attention for SC, ST and Muslim students to curb high rate of Out Of School Children, but it miserably fails in suggesting any policy initiative in this regard. GER in Higher Education for general, SC, ST categories, but for Muslims which is again very low as compared to national average, greater and focused initiatives for GER improvement of Muslims in higher education is urgently needed. The findings of National Achievement Survey (NAS) for general, SC, ST, OBCs is mentioned in the NEP draft as challenge, neglecting for Muslims which is again worst. It requires special measures for their betterment.

It is a fact that all Minorities in India are not educationally backward, only Muslims are (see India human development report of Niti Aayog, current MHRD annual report on education, and NSSO report). The 1986 policy was sensitive about minorities. NPE 1986, considered their education which proves its sensitivity towards a human rights perspective. The Govt. reports have accepted Muslims as ‘educationally most backward’. Muslims SC and ST constitute more than one third population of India; Govt. is silent on the educational issues of these communities. How can we dream of India to become a Super Power if one third population is devoid of Quality education? But most unfortunately, NEP 2016 didn’t mention any such initiatives for educationally backward classes of this country. Can a country become superpower, when its more than one third population is illiterate or mal-literate?

We also demand Government to establish Kendriya Vidyalaya Model schools in all the minority concentrated areas with 50% reservation to minorities and also establish University with Minority status in all the Districts. Provide Scholarships and Tuition Fee Free facilities to all the enrolled students.

It is strongly urged that, this Fellowship Scheme must be implemented with increased budget at par catering at least 3000 minority students each year for M.Phil. & Ph.D.

National Overseas Scholarship (Karnataka Model) should be implemented so that minority students can also go abroad for better, advanced educational and professional courses and research (Rs. 20 Lakh to each student)